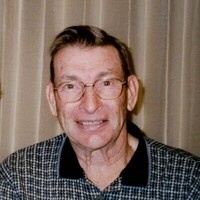 A private memorial service will be held on Friday, July 10, 2020 at 3 PM,  this will be live streamed via the funeral home website. Visitation will occur following the service from 4-6 PM at Graf Park in Truman (corner of N 3rd Ave and 1st st N) If inclement weather, visitation will be at the Truman Church of Christ, (401 W. Ciro St in Truman). Please observe social distancing recommendations, masks are encouraged.

He was raised in the farm life and attended country school through 8th grade near Frankfort, SD.  He started working and later joined the army and served in WWII for 16 months.  Upon his return, he took his GED and enrolled at SDSU in Brookings, SD.  He met Delores Anderson in the summer of 1949 and they married on June 14, 1952 in Redfield, SD.  They became live-in house parents at the Methodist Student Center to help with expenses while in college.  While as a member of the Army Reserve, his education was interrupted in 1950, where he served in Japan during the Korean War.  Upon his discharge, Vernon graduated from SDSU in 1954, first in his class, in the College of Agriculture, where he majored in Agricultural Economics and minored in Agronomy.  He appreciated the education he had received from SDSU.

He followed college with a long career as a farm loan appraiser and loan manager for Equitable Life Assurance Society in Truman, MN.  He continued his education to earn a master’s of science in 1958 with a major in economics while working for Equitable.

He and Delores moved to Truman in 1957.  He believed in community involvement and was the Chairman of the Truman Planning and Zoning Board for many years.  He was politically active and was delegate for county and state caucuses for years.  They were long time members of the Madelia United Methodist Church where he served on many boards.  He enjoyed playing cards, fishing, hunting and golfing.  They were members at Interlaken Golf Club in Fairmont.  He flew a private plane and was a member of the St. James flying club. He enjoyed taking friends and family for trips near and far to Mexico, Canada, Louisiana, New Mexico, California, South Dakota and many other states.  After retirement, he and Delores, wintered in Mesa, AZ.

He was a lifetime VFW member and a 70 year American Legion Member.  He was active in the Truman Historical Society and Truman Museum.  He provided financial scholarships to students at his alma mater, SDSU.

He is preceded in death by his parents; two brothers, Wesley and Arlan; two sisters, Lena Paulson and Eva Masat.

To send a flower arrangement or to plant trees in memory of Vernon Edwin Bau, please click here to visit our Sympathy Store.

To order memorial trees or send flowers to the family in memory of Vernon Edwin Bau, please visit our flower store.