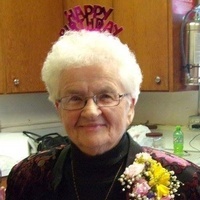 Valeen E. Altenburg, of Lewisville, passed away on her 89th birthday, February 18, 2019 at the Mayo Health Systems in Fairmont.

Visitation will be 5-7 PM Thursday February 28, 2019 at Zaharia Family Funeral Home in Truman. Funeral Service will be at 11 AM on Friday March 1, 2019 at St. John’s Lutheran Church- Antrim, rural Truman., with Rev. Mathew Rusert officiating. Additional Visitation one hour prior to the service. Interment will be in Ridgelawn Memorial Park, Truman. Zaharia Family Funeral Home is entrusted with arrangements.   www.ZahariaFamilyFuneral.com

Valeen was born February 18, 1930 on a farm near Lewisville MN, the daughter of Emil and Louise (Brummond) Breitbarth. At the age of 6, the family was parted due to the mother being unable to care of the 5 children. Valeen, her sister Darlene, and their two brothers, Dale and Marlon, were in a foster home near Sherburn. They were then taken to the Owatonna orphanage. Valeen was there for a few months and then went to live with her grandparents, Carl and Bertha Brummond, where her older sister, Violet, was living.   Her sister and two brothers, ages 5, 4, and 2 were left at the orphanage. Their mother Louise, passed away at the age of 38, on December 17, 1938.

Valeen was married to Eugene Altenburg on May 1, 1949 at the Antrim Church. He was the son of Mike and Hedwig Altenburg. As a housewife, she worked along-side her husband on the Altenburg farm. An important event in Valeen’s life was the death of her father on his 63rd birthday, on November 10, 1965.  She also worked part time at Stokley’s, the Retirement Home in Truman, The Historical Center in Madelia and Prairie Vue in St. James. Valeen loved quilts and quilting by hand for family, for friends and relatives near and far. She tended a large garden and did a lot of canning for her family.  She had a great love for card playing.

In addition to her parents, she is preceded in death by her husband, Eugene; two brothers, Dale and Marlon Breitbarth; and her sister, Darlene Meisch.

To send a flower arrangement or to plant trees in memory of Valeen E. Altenburg, please click here to visit our Sympathy Store.

To order memorial trees or send flowers to the family in memory of Valeen E. Altenburg, please visit our flower store.