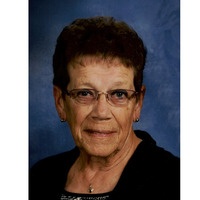 Norma Stough, age 82, of Fairmont, formerly of Truman, passed away on June 30, 2020 at her home, Goldfinch Estates in Fairmont. Due to the COVID-19 Pandemic guidelines, a private memorial service will be on Wednesday July 8, at 5 PM and will be live streamed via the funeral home website, followed by a Drive-by visitation/celebration parade at 6 PM at Trinity Lutheran Church in Truman. Inurnment is taking place at Ridgelawn Memorial Park in Truman. Zaharia Family Funeral Home is entrusted with arrangements. www.ZahariaFamilyFuneral.com

Norma Elaine Stough, daughter of Walter and Hilda (Yonker) Splinter was born April 7, 1938 in Jackson, MN. She grew up in Jackson, MN graduating from Jackson High School in 1956. Art & Norma met in high school and married April 26, 1957, just recently celebrating their 63rd wedding anniversary. Art and Norma lived in Sherburn, MN until 1963 when they relocated to Truman, MN. They bought the house on highway 15 (and all its contents, which fueled their passion for collecting antiques). In 1975, they built their own new home on Ciro Street with help from family and friends. Norma stayed at home with the kids until their youngest started school in 1969. She worked at Stan & Mary’s Café, Carrol’s Market in Truman, finishing out her working career with TFE Plumbing which later became Watson’s Plumbing and Heating retiring in March of 2000. Norma was often referred to as “Josephine the Plumber”, there was not anything that she could or would not attempt to fix. She loved all the years golfing especially every Ladies day as a member at Rose Lake Golf Club. She was active in Truman Jaycees, Cub Scouts as a Den mother, Campfire leader and #1 sports fan for her kids and grandkids. You could find her with a full cup of coffee (from sun-up until sun-down) roaming around everywhere. Cooking meals and baking for her kids and grandkids and any of their friends was her absolute favorite past time, everyone was always welcome at their house. She also enjoyed sewing, golfing, flower gardening, crafts, fishing, summer vacations up north with the family, or just visiting with neighbors, friends and especially her grandsons which were all her pride and joy. Most often you would find her in her sewing room with golf on TV working on a new craft or sewing project. Her most cherished gifts were her fleece blankets made and given to those most special to her. Norma was an active member of Trinity Lutheran Church in Truman, MN, helping whenever or wherever needed, official coffee maker and just watching over the church from her chair beside the window daily. She was a special aunt to many nieces and nephews as well as a second mom and grandma to many of her own kids’ and grandkids’ friends. After a brief illness with Lung Cancer, she passed away peacefully on June 30, 2020. The family would like to thank Goldfinch Estates and Mayo Hospice for the compassionate care provided over the past 3 months. To send a flower arrangement or to plant trees in memory of Norma Stough, please click here to visit our Sympathy Store.

To order memorial trees or send flowers to the family in memory of Norma Stough, please visit our flower store.