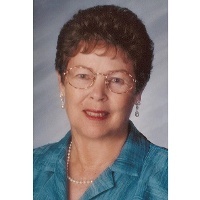 Joan Krenz passed away Saturday, August 31, 2019 at Renville Health Services in Renville, MN.  Funeral will be at 10:30 AM on Saturday, September 7, 2019 at Zaharia Family Funeral Home in Truman with Rev. Nathan Rusert officiating. Interment will follow in St. Paul’s Lutheran Cemetery, Truman.  Zaharia Family Funeral Home in Truman is entrusted with arrangements. www.ZahariaFamilyFuneral.com

Joan LaVonne (Williams) Krenz was born October 26, 1930 to Tyler Sr. and Hazel (Dorothy) Williams at her family home in rural Martin County.  She was the third of eight children.  She was baptized at the Church of Christ in Redwood Falls. She attended country school near Truman for grades 1-5, 6-8 in Redwood Falls and graduated from Truman High School in 1949.  She was crowned homecoming queen, Miss Truman and Miss Martin County.  She was a candidate for the Queen of the Lakes in Minneapolis. Joan was married to Lawrence Krenz on December 10, 1949 in the Little Brown Church in the Vale, Nashua, Iowa. They lived in Truman until 1953. She and her husband operated businesses including a drive-in and root beer stand in Farmington, MN and the Hollywood Motel and Restaurant in Clearwater, MN. They built and sold several homes on the “Krenz cul-de-sac” in Clearwater.  They enjoyed golfing, flying airplanes and fishing. Together, they enjoyed traveling in their motorhome.  She was an active member of the Lions Club, American Legion and VFW in Clearwater.  After retirement they spent winters in Arizona and summers on Fishtrap Lake near Lincoln, MN. They returned to Redwood Falls in 2000.  Due to declining health she moved to the Wood Dale Nursing Home in October 2018, Oak Terrace Assisted Living in November 2018 and Renville Health Services in March 2019. Joan always enjoyed her sweets and would often joke about having her dessert first.

Joan is survived by her brothers, Dale (Geneva) Williams of Mansfield, Ohio, Dean (Sandra) Williams of Renville, MN and Marvin Williams of Marshall; sisters-in-law, Aralia Taylor of Chicago, IL and Arlene Peters of Mankato, MN;  She will be sadly missed by many nieces and nephews.

In addition to her husband and daughter she was preceded in death by her parents; her brother, Tyler Williams; sisters, Betty Rasche King, Maxine Malmanger and Elaine Thayer.

To send a flower arrangement or to plant trees in memory of Joan LaVonne Krenz, please click here to visit our Sympathy Store.

To order memorial trees or send flowers to the family in memory of Joan LaVonne Krenz, please visit our flower store.