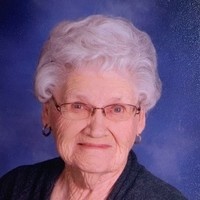 Ione Gray, age 96 of Truman passed away Wednesday October 2, 2019 at the Truman Senior Living Center. Funeral services will be at 10:30am Monday October 7th at the Church of Christ in Truman with Rev. Merrill Davis officiating. Visitation will be Sunday October 6th from 4-6pm at Zaharia Family Funeral Home and again one hour prior to the service at the church. Burial will be at Horicon Cemetery.

Ione Rachel Gray was born in Inkster N.D on Nov. 8, 1922 to Otto and Lavina (Ballentine) Kahler.

In 1934 she moved with her family to a farm near Truman. She was baptized at the Horicon Church in rural Truman.

She graduated from Truman High School in 1941.  On March 21, 1941 she was united in marriage to Donald Gray in Atlantic, Iowa but made their home in Truman. They raised five children here.

In 1961 they moved to Burlington, Colorado until 1983 when they returned to Truman. In 1992 they moved to Sioux Falls, S.D. until 1997 when they again returned to Truman. During the time in Truman she worked part time at Carrol’s Market. She was a very active member of the Church of Christ. She always had a smile on her face and attended or worked at many different projects at church.

She was preceded in death by her husband, her parents, her daughter Donna Reinke, her 2 sons Dennis and Dean Gray, and three brothers.

To send a flower arrangement or to plant trees in memory of Ione Rachel Gray, please click here to visit our Sympathy Store.

To order memorial trees or send flowers to the family in memory of Ione Rachel Gray, please visit our flower store.