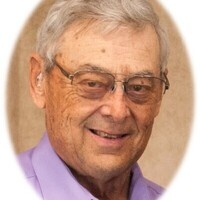 Gerald Urban, age 83 of Amboy passed away Thursday February 17, 2022 at Rivers Edge Hospital in St. Peter. Funeral services will be 10:30am Friday February 25 at Shephard of the Lake Church in Fairmont with Rev. Jason Zuehlke officiating. Visitation will be Thursday February 24 from 4-7PM at Zaharia Family Funeral Home in Truman. Burial will be at Lakeside Cemetery-Fairmont.

Gerald served his country in the Army Reserves and was a farmer his whole life. He was a devoted husband, father, grandfather, brother, uncle, and friend. In later years you could find him in the cab of a tractor helping his son in the field.

He was preceded in death by his parents and sisters Violet (Mervin) Tonn, and Lorraine (Martin) Tonn.

To order memorial trees or send flowers to the family in memory of Gerald Urban, please visit our flower store.

Shephard of the Lakes