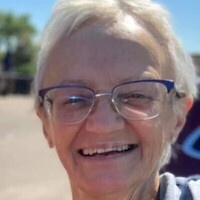 Delight “Dee” Shell, age 72 of Truman passed away peacefully Saturday April 30, 2022 at Heartland Senior Living in Truman. Delight Evelyn Shell (Roberts) was born October 6, 1950 in Mankato Minnesota to James and Luverne Roberts. She grew up on her parents farm just outside of Truman. Dee was the second born of 5 children. She was a classic farm girl, loving horses, tractors, the outdoors, and learning and reading. Dee started her education in a one room schoolhouse. She attended middle and high school at Truman public school. She graduated in 1968. In 1970 she ventured out to Yellowstone National Park where she worked a season at Yellowstone Inn. Dee came back to Minnesota after the tourist season in Yellowstone was over. Dee's very dear friend, Barb, convinced her to move back west. She lived with Barb in a small 2 bedroom apartment, and worked at a local donut shop. Delight met Daniel Kennedy in Colorado. they were married on April 25, 1972 and settled to start a family in Minnesota near Dee's parents. They both enjoyed the outdoors and spending time together. Son Dale came along in 1976, followed by son Dustin in 1981. Sadly Dee and Daniel went their separate ways after 16 years of marriage. Dee went to Jackson Community College and graduated with a communications degree in 1990. In between she worked a couple of factory jobs, but she really enjoyed electronics. At 69 years of age her central air went on the fritz. she tore apart the outside unit and diagnosed a bad circuit board. she called the local repair guy, ordered the part, and fixed it herself! Dee went on a horse ride with the Fairmont saddle Club in 1993, where she met James Shell. Time tells their story as they were married on October 10th, 1998. They lived in Welcome Minnesota. Dee and James both shared a love of horses and raised several over the following years. Jim and Dee also enjoyed bonfires and long walks down their tree lined driveway. Dee worked at 3M from 1996-2014, she worked on the bumpon and hook and loop departments. She later retired to care of her husband Jim, who sadly passed away on April 16, 2019. After Jim's passing, she kept up her acreage and her faith, she was smiling until the very end! Delight is survived by her sons: Dale (Kara) Kennedy and Dustin (Jessie) Kennedy, step sons: Joel and family, Ryan and family and Adam and family, 11 grandchildren Ariel, Alexis, Jamie, Payten, Trent, Kiley, Tiara, Dylan, Lincoln, Sophia, and Skyler, step grandson Brayden, 5 great grandchildren, with 2 more on the way, siblings, Darwin (Sandy), Joyce (Jerry), and Betty, also many nieces, nephews, cousins and friends. Delight is preceded in death by her parents, James and Luverne Roberts, husband James and brother Mark Roberts.
To order memorial trees or send flowers to the family in memory of Delight Shell, please visit our flower store.