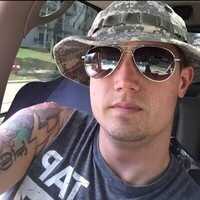 Corey Sathoff, age 34 of Truman, passed away on Thursday, February 18, 2021 due to an auto accident near Truman.  Visitation will be on Friday, February 26, 2021 from 4-7 PM at Zaharia Family Funeral Home in Truman. Funeral Service will be held on Saturday at 10 AM at St. John’s Lutheran Church-Willow Creek with Rev. John Bennett officiating. Additional visitation one hour prior to the service. Interment with Military Honors will follow in Willow Creek South cemetery.  Zaharia Family Funeral Home is entrusted with arrangements.  www.ZahariaFamilyFuneral.com

Corey Robyn Sathoff was born November 6, 1986 in Fairmont, Minnesota to Robyn “Rob” and Michelle “Shelly” (Kastning) Sathoff. He was an involved student in the Truman Public School and graduated with the class of 2005. He was a proud member of the Army National Guard.  Corey had many hobbies that mostly took him outdoors.  He loved to go ATVing and kayaking with friends. Deer hunting at the family farm with his mother and uncles, Jim and Steve.  (And they did bag some nice deer!) and coyote hunting with his uncle Jim. Corey loved to travel, experiencing weekend concerts; Vegas, Mardi Gras, and even trips to Idaho to see his sister, top his list.  Corey was a master pull tab player, somehow he knew just how to find that winning ticket.

Corey was a great friend and often offered a helping hand, whenever and for whatever, he was always available; whether it was a Fire department event, Truman Days, or a fundraiser for someone he didn’t even know.  Corey was employed at GreenPlains, Ethanol Plant in Fairmont from 2010 until the time of his death and was a Process Team Leader. He was a firm believer of “Work Hard and Play Hard.”

Another title Corey held was Dad! His daughter Annica was his whole world and he was an amazing father.  In addition to this super title, he was proud to hold the title of Sergeant.  Even after being honorably discharged, he always held his service close to his heart.

Corey Robyn Sathoff, joined the 2nd Battalion/135th Infantry 34th Infantry Division, Red Bulls, Minnesota Army National Guard in March of 2004. He attended Basic Training in Ft. Benning GA, after Basic and Advanced Infantry Training, he returned to Home Station in Albert Lea Mn to carry out his enlistment. In March of 2007 He deployed to New Mexico for Operation Jump Start, and later in 2007 was in-voluntary ordered to Active Duty in support of Operation Enduring Freedom with the KFOR-9 bravo deployment to Kosovo, July 2007 thru August 2008. Corey became the 1st Platoons 2nd Squad Bravo Team leader and commanded a team of 3 Infantry Soldiers. After returning from Kosovo, Corey enlisted in the 86th Training Division United States Army Reserves out of Ft. McCoy Wisconsin, where he was an Observer Controller Trainer for the remainder of his 6-year initial enlistment, leaving the Military with an Honorable Discharge.

Corey’s dedication to the Oath he took to defend the Constitution of the United States of America, and The State of Minnesota, are of great credit to himself, his country, and his family which he loved so dearly.

Corey is preceded in death by his grandparents Arlo and LeAnn Sager, Harvey Sathoff, Robert Kastning and great-grandparents.

In lieu of flowers, please consider making donations to Annica’s future endeavors or a charity of your choice.

To send a flower arrangement or to plant trees in memory of Corey Robyn Sathoff, please click here to visit our Sympathy Store.

To order memorial trees or send flowers to the family in memory of Corey Robyn Sathoff, please visit our flower store.