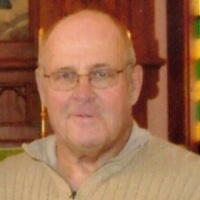 Arlo Richard Sager, age 74 died Monday January 7, 2019 at his home in Fairmont. Funeral services will be held Saturday 10am January 12 at St. John’s Lutheran Church in Willow Creek with Pastor John Bennett officiating. Full military honors will be provided by the Fairmont Legion. Visitation will be 5-7pm Friday January 11 at Zaharia Family Funeral Home and one hour prior to the service at the church. Burial will be at Willow Creek South Cemetery. Online condolences can be left at www.zahariafamilyfuneral.com

Arlo was born at Hunt Hospital in Fairmont January 14, 1944 to Walter and Olga (Wolf) Sager. Most of his childhood, school years and adult life were spent in Martin County. He spent several years living with his mother and maternal grandparents while his father was overseas during WWII. Arlo started school in Marshall, MN and then attended Truman country school, District #107 and then St. Paul’s Lutheran Parochial in Truman, then East Chain Consolidated school graduating from Fairmont High School in 1962. In 1968 Arlo married Rosalie Peck in Sioux Falls, SD. They later divorced and on November 24, 1976 he married LeAnn (Black) Kastning.

In 1962 Arlo entered the United States Army. He spent time at Ft. Leonard Wood and Ft. Greeley. He then spent time at White Sands Missile Range in New Mexico. He was honorably discharged in 1965. He then went on to work for the Iowa Electric Light & Power Company as a meter reader and fill-in bookkeeper. After three years, he advanced to gas mechanic and then a pipeline welder for several years eventually becoming a foreman. Arlo retired in March 2007 after 41 years of continuous service with the gas company.

Arlo and LeAnn owned and operated Sager Photography for 20+ years. Arlo was an avid hunter, as well as enjoying archery, bicycling, running, including Grandmas Marathon twice, and gardening.

Arlo is preceded in death by his wife LeAnn Sager, his parents, two step-fathers; Ralph DeMeo and Don Steinberg, grandparents and many aunts and uncles.

To send a flower arrangement or to plant trees in memory of Arlo Richard Sager, please click here to visit our Sympathy Store.

To order memorial trees or send flowers to the family in memory of Arlo Richard Sager, please visit our flower store.