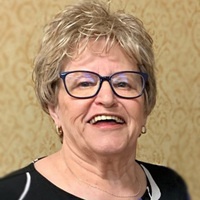 Ardene Maureen Miller, age 80 formerly of Truman, passed away on Friday, April 15, 2022 at Mayo Clinic Health Systems in Fairmont. Funeral services will be held at 11am on Friday, April 22, 2022 at Trinity Lutheran Church in Truman. A time for visitation will be held from 5-7pm on Thursday at Zaharia Family Funeral Home in Truman and one hour prior to services at church. Burial will take place at Ridgelawn Memorial Park in Truman.

Ardene was born on January 12, 1942 in Hartington, Nebraska to Elvy and Sylvia (Johnson) Burrus. She graduated from Fairmont High School in 1960. On January 14, 1961, Ardene married Gerald “Jerry” Miller in Fairmont. The couple settled in Truman and began growing their family. Ardene worked several jobs over her lifetime, including over 20 years as a CNA at Lutheran Retirement Home in Truman, 5-6 years serving at Randy’s Restaurant, 15 years in the deli at Casey’s, and also several years as a Walmart Greeter. She was a member of Trinity Lutheran Church in Truman.

Ardene enjoyed crafting, making cards, and scrapbooking. She also loved playing cards with the ladies. One of Ardene’s favorite pastimes was shopping and attending craft shows with her dear friend, Linda Hauge.

To order memorial trees or send flowers to the family in memory of Ardene M. Miller, please visit our flower store.